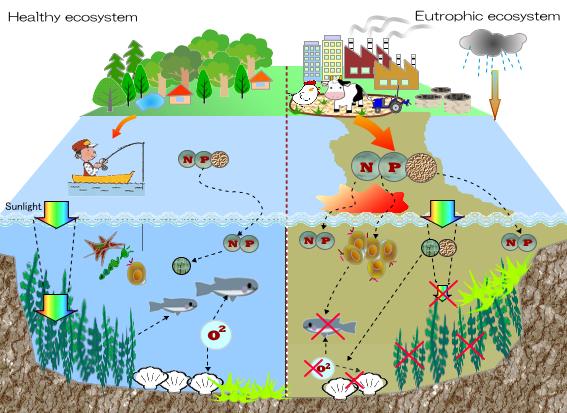 Fig. 1. Conceptual diagram showing comparison of healthy ecosystem with eutrophic ecosystem. In a healthy ecosystem, nutrient inputs (e.g. nitrogen and phosphorus) takes a key role of maintaining the balance between the growth of macroalgae (red algae, brown algae, and/or green algae) and phytoplankton and their predator species as well as high water clarity. Appropriate density of phytoplankton and algae species contributes to the optimum DO level for fish species, and consequently, humans can take benefits from the marine environment. On the other hand, in a eutrophic ecosystem, large amount of emissions and nutrient inputs from farms, urban areas, factories, and sewage treatment plants are into the marine environment triggers rapid growth of phytoplankton, exceeding the consumption capacity of zooplankton and fish. This growth causes lower water clarity and decreased light penetration, lower DO, and decreased hydrophytes. Consequently, harmful algae blooms abnormally occur as well as water contamination and fish kill.

Eutrophication is a phenomenon in which conditions of certain water bodies such as seas, lakes and rivers change from being oligotrophic to eutrophic. Originally, this term explains a natural process occurring in ponds and lakes by non-periodic changes of biotic communities under certain environmental conditions; oligotrophic water with low nutrient concentration and low production activities by few plankton and fish changes to being eutrophic with high nutrient concentration and high production activities. However, recently this term has been used more often to indicate increase of nutrient inputs to water bodies by anthropogenic activities. Sewage, runoffs from agriculture and livestock industries, and industrial waste water are considered as causes of this type of eutrophication.
Man-induced eutrophication changes the structure of marine communities and decreases the biological diversity. In an extreme case, it may lead to occurrence of red tides or fish kills. Therefore, eutrophication has been widely recognized as one type of pollutions or environmental problems. The water with progressing eutrophication has abundant nutrients, so primary production near the surface is increased by photosynthesis, and specific phytoplankton tends to grow rapidly. In addition, when abnormally-grown plankton communities are dead, they deposit at the sea bottom. Oxidative degradation of organic matters leads to drastic decrease of dissolved oxygen (DO) and hypoxic water masses are developed. Moreover, this negative process leads to stagnant of organic degradation, sediments of sludge then, anaerobic bacteria, which grows without oxygen, become dominant with odor. When these hypoxia or anoxia water masses are mixed with surrounding waters, it may lead to fish kills. Thus, in the eutrophic environment, primary production by photosynthesis increases; however, it cannot always lead to increase of fish catches. Damages from eutrophication became more when red tides occur over fish cages of mariculture field.